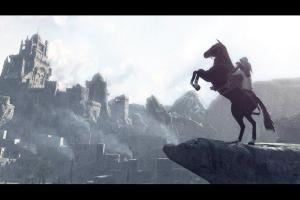 A white-robed hooded rider spurs his stallion to the castle of Masyaf to receive an assassination contract from his master Rashid al-Din, the infamous leader of the Assassin Brotherhood. The rider’s name is Altaïr ibn la-Ahad. They meet in a library, and the assassin receives his instructions: Marquis Conrad of Montferrat, a Templar crusader, must die.

If this sounds like a video game you’ve played, then you might be aware of how the creators of Assassin’s Creed conduct thorough historical research. Although they take liberties in inventing a fanciful storyline, there are historical realities behind the famous video game.

The fida’is, brave soldiers of the Ismaili sect of Islam, are the real-world historical source for the Assassin myth. In Crusader-era Syria and Iran, they would infiltrate the social circle of political targets and wait, keeping up appearances, before threatening them by thrusting a dagger beside into their pillow at night.

Often, the threat would be enough to deter the enemies of the Ismailis, but occasionally they used real violence against targets, as a last resort. One such a target was Marquis Conrad of Montferrat, assassinated in 1192 in a courtyard at the port-city of Tyre just before his coronation as King of Jerusalem—by figures disguised as Christian monks. Wearing robes reminiscent of these assassins, Altaïr is the character that players of Assassin’s Creed guide through multiple levels, conducting similar assassinations. However, the names of the real assassins are lost to history.

As for the castle of Masyaf, it actually does stand in Syria, though not in the location specified in the game. Sinan Rashid al-Din, Altaïr’s master, was the actual legendary Ismaili leader who once called it home. Called “The Old Man of the Mountain,” he was lame in one leg, a learned alchemist, and was said to have had telepathy, clairvoyance, and the ability to communicate with spirits. Perhaps the Apple of Eden, Assassin’s Creed‘s illusion-creating artefact, had had something to do with that .. but once again, these stories are lost to history.

The truth of the Ismaili Assassins is often difficult to separate from myth.

One of the first myths is from Marco Polo’s account of the Earthly Paradise of the Assassins in his Travels. Assassin’s Creed II: Revelations has sequences that play off Niccolo Polo’s supposed encounter with the Brotherhood.

Supposedly, the Old Man of the Mountain had command of a fortress called Alamut (in Polo’s account not Masyaf), where he had an exceptionally beautiful garden. Milk and honey flowed in rivers through his garden, which was filled with fragrant fruits and flowers, appearing as the Qur’an’s vision of Paradise. The Old Man would bring men into the garden and have young virgins entertain them, before serving them wine laced with hashish. He would then bring them into his presence.

There, mission briefing would occur, and a promise. Since an assassination was essentially a suicidal job—it was assumed that the guards protecting the target would inevitably kill or capture an assassin—the Old Man offered Paradise itself to his minions. Since the drugged assassins thought they had truly found Paradise at Alamut, they believed the Old Man could offer that.

Through this method, the Old Man of the Mountain supposedly eliminated his political rivals and advanced his own interests.

Marco Polo’s account is a juicy myth. Essentially a result of Western fascination with the East, Europeans found in the Earthly Paradise of the Assassins a way to explore fantasies forbidden within their moralistic society. The myth gained popularity throughout the ages. According to Wikipedia, Friedrich Nietzsche in his Geneology of Morals considered the Assassins free spirits not bound by Western strictures of morality, operating according to the creed—now made famous by the video game—that states, “Nothing is true; everything is permitted.”

However, the historical reality behind the Brotherhood demolishes these Orientalist fantasies.

To begin with, there could never really have been a garden at Alamut. Peter Willey, in his book Eagle’s Nest: Ismaili Castles in Iran and Syria, to which I am indebted in this article, describes the castle’s physical details at great length. Alamut, which means “Eagle’s Nest,” is perched above a steep and rocky ridge. It is a very narrow castle and is said to have once contained a great library. However, it is simply impossible to imagine a luxurious garden growing in such a narrow courtyard.

Marco Polo clearly had never seen Alamut, which leads scholars to suppose that his famous journey to the Orient never actually happened. He may never have left Constantinople, composing his Travels from hearsay and the stories of other travelers.

To debunk the myth that the Assassins took hashish before carrying out their murders, Peter Willey draws attention to how it is impossible to aim a blade with any accuracy while high. Dexterity takes a serious hit when the mind is clouded, and a successful assassination would require presence of mind to quickly slide a blade between a target’s plate armour or through chain mail—and sometimes the target would be on horseback.

It also must be emphasized that the fida’is did not always kill. Often, the mere threat of a dagger thrust in a target’s pillow would make him withdraw a siege from a castle, or pull back his troops from a strategic region. The fear caused by the fida’is had a real affect on the enemies of the Ismailis, who were much more powerful and numerous. It kept them away from strongholds and villages—and added to the paranoia that would launch the Assassin myth.

The Ismailis were considered heretics by many Muslim religious groups. Hunted like witches by enemies seeking to weed out the fida’is from their ranks, they became blamed for assassinations that they did not commit. Innocent people were accused of being Ismaili assassins. For these, the punishment could be severe: al-Ghazali suggested the death penalty for any Ismailis who remained apostates of the Islamic faith. Meanwhile, the political situation in the Middle East—so little has changed since—was volatile and paranoid, filled with many rival political groups, most of whom employed assassination as a tactic.

In such an environment of fear, myths can easily arise. The Ismailis were blamed for more assassinations than it would have been prudent to commit. Those who blamed them were either reacting out of paranoia, or seizing an appropriate scapegoat, to better mask their own political and military stratagems.

It is precisely through such times of paranoia that fantasies take root. The historical record today can only give us glimpses into the past, and those records may be contaminated with hearsay at best, if not a deliberate falsification of information. Today, you can immerse yourself in the myths that history has passed down to you, playing a part in them through your PS3 controller.

What the the Assassin myth tells us is that human beings prefer to indulge in great stories rather than seek the truth of history. Fiction and reality: these are opposed modes and people enjoy fiction more than reality. For a writer of historical fantasy such as myself, what an insight! “Nothing is true; everything is permitted”: the creed of the historical fantasist!