Culloden Moor, which was once called Drumossie Moor, is a “boggy, heather-clad upland moor above Culloden House, south-east of Iverness, overlooking the broad waters of Moray Firth” (Magnusson 617). It is pretty good metaphor for the mire the Jacobites found themselves in on 16 April 1746, when the battle was fought… 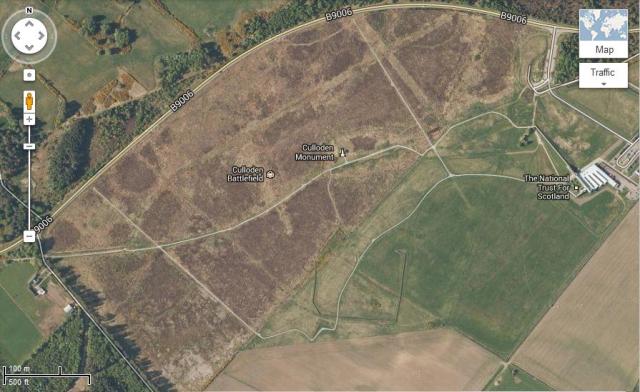 When the Jacobite army was assembled on that battlefield, Prince Charlie was ready to receive the Hanoverians, led by the Duke of Cumberland, in the last pitched battle fought on English soil. But he forgot one thing.

He really should have checked his calendar because he might have realized it was his bitter enemy’s birthday. Happy Birthday, Butcher Cumberland!, he might have said. (Charlie’s followers would later call him a butcher, after the battle.) To celebrate, the English commander gave a rest day to his troops, which was thoughtful, not to mention useful.

In exchange, his soldiers would bring him back the material to make a stylish fence around his family’s country house. Believe it or not, this is not a throwaway remark, and there will be more on that later.

Celebrating with Cumberland was the infamous-in-Quebec Conquerer of Canada, General James Wolfe, though he was not a general yet. Known for his conquest at the Siege of Quebec and leading the English forces in the Battle of the Plains of Abraham, Wolfe is an ambiguous figure in Quebec culture. Anglophones might occasionally stand by him, but the Francophone majority tend to resent his actions. For one thing, he ended New France and brought French Canada under British control. The Quebec nationalist movement, represented in Quebec by the Parti Quebecois, makes Wolfe into “the big bad Wolfe,” according to one Aislin political cartoon, the legendary enemy of the Quebecois.

Before all that, according to Wikipedia, he fought in the War of Austrian Succession, where he was made a brigade major after showing heroism against the French on the Continent. In Scotland by October 1745 to deal with the Rising, Wolfe became an aide-de-camp, for General Henry Hawley, who he was with on the duke’s birthday on Culloden Moor. He waited with the rest of Cumberland’s troops for the fateful encounter.

Since Charlie was missing Cumberland’s birthday, he thought it odd when the English troops did not arrive as planned, which muddled his plans. As early as 6:00 am on April 15, the army was ready to fight—except the enemy didn’t show.

Which is where Lord George Murray, a Lieutennant-General of the army, came up with the bright idea of a night raid on Cumberland’s camp. Maybe he wished they’d been invited to his birthday. They probably almost did wish it, actually, all joking aside—at least they feed you at a party.

The army had no food for two days, the clansmen were tired, and they were cold. Lord Murray’s idea was a long shot at best. It would be impossible to move 5,000 men 16 kilometres through unfamiliar terrain at night with the sort of discipline necessary for secrecy.

9:00 pm: The first three columns doused their campfires and marched off.

2:00 am: The leading soldiers were only 6 kilometres from their camp, with disorder and confusion in the ranks behind them. Everyone, officers and soldiers, had no idea where they were going.

Dawn: They were 6 kilometres away from their target, and deprived of a night’s sleep. Meanwhile, Cumberland’s forces started waking up, stretching, and began thinking of breakfast. Bitter Scotsmen slowly returned to camp, fearful of being spotted.

Upon their arrival, Prince Charles is said to have shrugged and said, “It is no matter, then; we shall meet them, and behave like brave fellows.”

He was right about being brave. The problem was, it was an enormous matter.

The Scots were famished and freezing (In Scotland, who isn’t?). Once Cumberland’s men were done with their morning routines, breaking fast with bread, cheese, and brandy, their marching drums awoke the dreary-eyed Highlanders. If ever a pot of coffee were needed more at any time in history…

The enemy was only 6 kilometres away (all these ‘6’s might have been an omen, in retrospect). Utter confusion followed in the Scottish ranks at the arrival of Cumberland’s army, and only 1,000 men answered the threat on their own initiative. 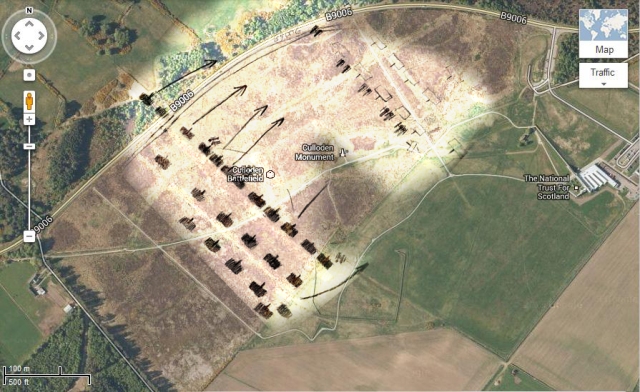 10:00 am: 5,000 Highlanders assembled themselves at last, though they are disoriented and dead tired, still not fed. Each man was eventually given a single biscuit to eat before they set off. A chilling nor’easter brought in stabbing sleet and rain to oppress them even further. The English had 800 mounted dragoons, ten three-pounder guns, six mortars, and outnumbed the Scots by 2,000 or 3,000 men. It was not shaping out to be a great day.

11:00 am: The armies were within sight of each other. Now would be time for an inspiring speech on the part of the Bonnie Prince, and an opportunity to moon the enemy, but this wasn’t Braveheart, unfortunately.

Around this time, they had to come to terms with the grounds they’d chosen. It was decent ground for a Highland charge, though it also gave great advantage to the enemy dragoons, who were mounted and well equipped, unlike the Scottich cavalry. Lord George Murray disapproved of the terrain vehemently, but by this time, it was too late. 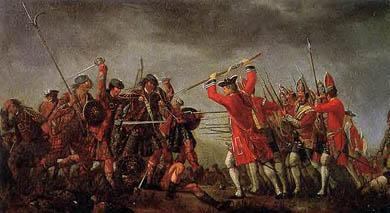 The Jacobites fired first with their rifles. The Hanoverian forces responded with precise roundshot from their cannons, which created a few casualties among the Scots but mostly succeeded in creating confusion. Communication was so terrible among the Jacobites that the Highlanders awaiting the command to charge (“Claymore!”) had to wait for a good hour until they heard it at last. During all that time, powder clouds, sulfur, and thunder from canons caused blindness and uncertainty.

Finally, the shout of “Claymore!” went through, and 1,500 men forming 8 clan regiments, charged “in a wave of unleashed kilted fury” (Magnusson 620). These included the Camerons, the Macintoshes, Macphersons, the Macleans, the Maclachlans, and Clan Chattan, all of whom encountered the first shock of battle.

This happened when Cumberland switched his artillery from roundshot to grapeshot, a deadly strategy. The new ammunition was essentially cannisters filled with iron nails, led balls, and other sharp objects. Imagine clouds of flying wedges flying at you. The clansmen were decimated and massacred. Furthermore, one row of Government infantry would shoot a volley of bullets at the Jacobites, while the others loaded their muskets, repeating so there was always a volley of lead hissing through the smoke, finding their targets in a haze of bloodied tartan.

If a Highlander even came close to Cumberland’s forces, he even had a secret weapon to stop the claymore broadswords used by the Jacobite infantry. “Instead of engaging the clansman coming directly at him (thereby catching his bayonet on the enemy’s leather shield), each soldier went for the unprotected right-hand side of the man on the attacker’s left,” writes Magnus Magnusson. “The tactic took steady nerves, and complete faith in you comrades—and it proved very effective” (620).

After the Government employed these devastating techniques, organization fell apart and the battle was all but lost. The Highlanders fought bravely, but ineffectively, kilted bodies littering the moor. Then the dragoons stormed the battlefield to bring the battle to a swift end, all after only 30 minutes.

Along with the Battle of the Plains of Abraham, Culloden ranks among the shortest most important battles in history.

In the midst of the carnage, MacDonald of Keppoch is said to have run at his enemy, weeping as he was struck down by a volley of led balls, yelling in Gaelic, “Mo Dhia ando threig clann ma chinnidhmi?” In English: “My God, have the clansmen of my name deserted me?”

Lord George Murray marshalled some order to the right wing of the army in order to withdraw. But the sight of Prince Charlie weeping as he was escorted on horseback from the battlefield by his Irish officers was too much for many of the Jacobite supporters. Lord Elcho, a commander of Charlie’s bodyguard, yelled, “Run, you damned cowardly Italian!” (See, Rome was the new home of the Jacobite leaders after the Hanoverians supplanted them. They spent a lot of time arguing there.)

In the carnage that followed (for the blood of the day was not yet all spilled), the Duke of Cumberland would earn his derogatory title as Butcher Cumberland. Having been handed a fine birthday present in his easy victory at Culloden, his soldiers would soon run the field, slaying wounded Scotsmen and taking the steel from their claymores to present as trophies to the Duke.

According to Fitzroy Maclean, Cumberland used the swords to make a fence at Cumberland House, his family property. But such trophies do not last forever, and when the house was demolished in the 1800s, the sword blades were brought to Inverary Castle.

Thus concludes Part II of the epic of the Battle of Culloden. Stay tuned for the third part, in which Bonnie Prince Charlie dresses in drag to escape redcoats in pursuit of his £30,000 bounty! Also, I uncover something rather shocking about my family heritage…

Battle of the Plains of Abraham: http://www.thecanadianencyclopedia.com/articles/battle-of-the-plains-of-abraham

2 thoughts on “The Battle of Culloden Part. 2: Jacobites V. Cumberland”