John Dee was Queen Elizabeth I’s court astrologer, mathematician, and geographer–and he might have become the first lord of the North American territory we now call Canada.

Dee is known as a “Renaissance man” for the breadth of his knowledge and for his tendency towards the occult. On a trip to the Continent, he supposedly attempted to summon angels with fellow sorcerer Edward Kelley. Back home, he was a respected courtier whom Elizabeth would often consult–he set the day for her coronation, for example, based on favourable astrological conditions. His knowledge of geography enabled Sir Francis Drake to circumnavigate the globe. In addition to coining the term “British Empire,” Dee is known for employing a spy network, being the first to sign his name under the code “007.”

One gift Dee gave to his Queen was a book called The Limits of the British Empire, or in Latin Brytanici Imperii Limites, which he wrote between 1577 and 1578. A wonderful edition of his work, with an introduction, was printed in 2004 by editors Ken MacMillan and Jennifer Abeles based on a manuscript copied by an amanuensis in 1593, which I have consulted.

Among the things Dee claims in the book is that Queen Elizabeth had rights–the justification for which go back to ancient times–to most of the territory we now call North America. Dee claims that King Arthur and his knights  conquered lands near the Arctic Sea, even a territory we now identify with Baffin Island. He also negotiated that he should be allowed ownership of all lands above the 50th parallel. Except for a thin interval of land just above the Canadian border with the modern U.S., that would encompass all of Our True North Strong and Free!

Of course, at the time, England’s colonial strength in its first decade of New World settlement was not a powerful  force. Sir Walter Raleigh’s settlement on Roanoke Island proved, in the end, to be a disaster, although it produced a few fascinating discoveries and occasioned John White to paint a series of watercolours of Native folk. Roanoke Island was abandoned mysteriously and no one to this day knows why. 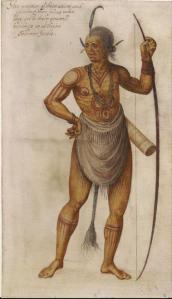 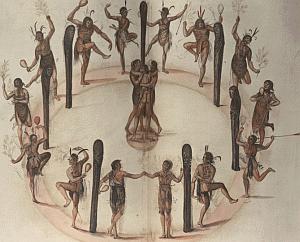 Aside from such ephemeral settlements, England’s imperial strength was mostly limited to the occasional raid on Spanish ships. Privateers such as Sir John Norris and Sir Francis Drake were both explorers and ship-plunderers. Martin Frosbisher and Humphrey Gilbert were given licenses to start overseas colonies close to the Northwest Passage. However, there was a distinct lack of overseas activities through much of the 1590s, when the surviving manuscript of Brytanici Imperii Limites was written.

John Dee’s book advocated for the recovery of ancient British lands, including the North Atlantic, the British Isles, Scandinavia, the Iberian Peninsula, and half of North America. His sources ranged from Byzantine Emperor Justinian, Geraldus Mercator, Jacobus Choyen of s’Hertogenbosh, Hector Boece, and Geoffrey of Monmouth’s Brut–a chronicle of Arthurian legends.

It was becoming urgent that England compete with Spain for the New World, which Dee occasionally named “Atlantis” or “Meta Incognita.” The Spanish empire was at its height and came to be associated with the cruelty that it was inflicting on its Native people and the barbaric human-sacrificing rituals of the Aztecs. (Of course, when England did settle the New World, they spread another wave of cruelty across the Native populations, in addition to the spreading of lethal diseases. ) While Spain sought to conquer through papal bulls, planting markers, and reading texts of conquest to often illiterate indigenous peoples (that never goes down well), the Brits divided their land with fences and houses.

Frosbisher’s plan to settle parts of North America was a state secret, but also an object of interest to the Spanish ambassadors in London. Any settlement in the New World, which was seen as territory partitioned between Spain and Portugal, could lead to an act of war.

Alexander VI (aka Roderigo Borgia) wrote the famous papal bull Inter Cetera in 1493 (a hundred years before Dee’s manuscript was written) and the still more famous Treaty of Tordesillas. Both these documents split the territories in New World between the two Iberian countries along an arbitrary line in the Atlantic Ocean. None of this allowed England a toehold.

How could Dee overcome this opposition? Through sneaky legal loopholes and little imagination.

Basically, he alluded to a section of Justinian’s Digest that might well be the foundation of that oldest and dearest piece of legislation: finders keepers, losers weepers. Next time you find a penny on the ground, you can tell your irate friend that “what presently belongs to no one becomes by natural reason the property of the first taker.”

Of course, the land was owned–by hundreds of thousands of Native American peoples. In all fairness, John Dee might not have been aware of this truth, since the New World was still vastly undiscovered. But he might have taken the hint from Raleigh’s Virginia settlement that other people might already live there.

Although Lord Burghley doubted Dee’s accuracy, he laid the legal groundwork for England to claim everything from Terra Florida (which is Florida) to the territory of the Duke of Moscovia in Russia.

Now the imagination came in. Tracing the ancestry of Britain from Troy through the legendary founder Brutus and down to King Arthur, Dee referred to how Arthur conquered thirty kingdoms in the North Atlantic and Scandinavia. Since Arthur conquered these lands for Britain first, Elizabeth had a right to them now, so long as she settled the land. Arthur, a Welsh king, was supposedly an ancestor of the Welsh Tudors, whose arrival on the English throne in 1485 signaled the revival of the “British” empire, after a long domination of England under the Saxons.

Dee’s mysterious Welsh source book–supposed to be the same nonexistent book on which Monmouth bases his History of the Kings of Britain–claims that King Arthur conquered the Arctic regions in the 530s. Arthur’s conquests of the Arctic, in which he encountered pygmies (Sibereans? Proto-Inuit tribesmen?), are recorded in Arthuri Gestis, or The Deeds of Arthur. During Arthur’s voyages, he encountered many troubles, including fast-flowing seas that blocked his passage to Northern Norway. Four thousands knights lost their lives in these treacherous passages among the straits of Norway. In the mountains around the North Pole, there were cities in Arthur’s time. The lands he conquered include Iceland, Ireland, Greenland, Shetland, Orkney, the Faroe Islands (Friseland), Grocland (NW corner of Greenland), Icaria (an island off of either Ireland or Labrador), Estotiland, and Drogio. 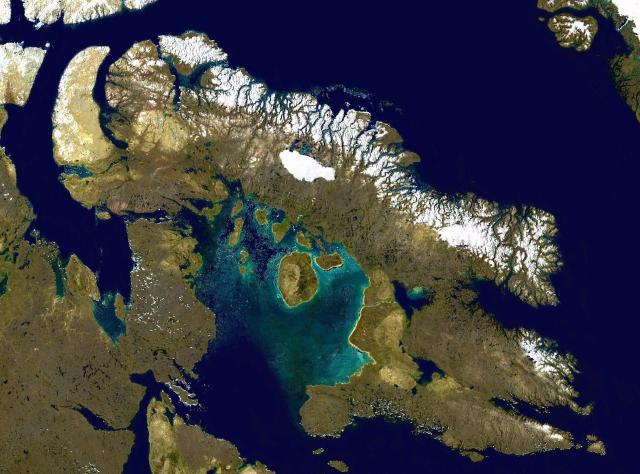 Estotiland is Baffin Island. Dee’s source about the Estotiland came from the journey of two Venetians to the Arctic region in the thirteenth century, Niccolo and Antonio Zeno. In 1558, Niccolo Zeno, a relative of the pair, published an account of this extraordinary story.

Zeno describes Estotiland as an island smaller than Iceland with a mountain in the middle and four rivers. It was ruled by a king in a beautiful, populous city, who kept interpreters. Legends told of a famous library of ancient texts in a strange language only two people in the city could speak, though the library was eventually destroyed. This Scandinavian civilization had gold mines, cultivated and brewed beer, and spoke like Europeans, trading with Greenland for skins. Possibly the texts were in Latin, a language uneducated commoners could not speak.

When most Canadians think of Baffin Island, they probably think of an expansive wasteland filled with ice and snow. But who knew it once had a king?

The Zeno brothers also discovered the “province of Drogio,” which likely corresponds to Labrador. How about we sign a petition to make Newfoundland and Labrador to change their name to Newfoundland and Drogio? They even supposedly landed in Saguenay, Quebec (or “Saguenaya”) two hundred years before Jacques Cartier did in 1535!

In addition to this fascinating Canadian content, I find how Dee’s book absolutely busts the myth that Christopher Colombus discovered the New World to be particularly gratifying.

His other sources for Brytanici Imperii Limites come from semi-legendary figures, such as Saint Brendan, who sailed from the British Isles in 560. He landed in Bermuda, which he called Insula Demonum, or “Island of Demons.” Should we be surprised that he claimed to see supernatural frights on an island known to exist in what is now known as the “Bermuda Triangle”? (Fun fact: Cambrien Machutus, a sailor on Brendan’s ship, became St. Malo, which became the name of the city in which Jacques Cartier was born in 1491!)

In 1170, Lord Madoc, a Welsh prince, an ancestor of Queen Elizabeth, was outraged that his father would leave him no inheritance. So he set sail across the world. He settled, of all places, in Mobile Bay, Alabama! “Devil’s Backbone,” a mound in Indiana, is attributed to the Welsh Prince. This was the first British colony in the New World and Dee used it as precedent to establish England’s rights to conquer the new continent.

There is such a wealth of stories in these legends … but how to separate reality from myth? I’m afraid I do not have the answers. A king on Baffin Island, a Welsh nobleman settling Alabama, John Dee as Lord Canada, and King Arthur as Emperor of the Arctic … these are only a few of the truly radical stories out there. Supposedly Egyptians sailed up the Mississippi, which I cannot confirm or deny, though Neil Gaiman certainly confirms this in American Gods.

I would certainly like to credit these tales. They are the type of stories archeological evidence can do little to confirm.

In conclusion, Brytanici Imperii Limites is a fine example of “historical fantasy” used to justify imperialism and the “rights” of the English to settle North America. It reveals that the justification the British first used for their settlements in North America was based on a 900-year-old lie in Geoffrey of Monmouth’s History of the Kings of Britain.

“Dee built an empirical edifice of pseudohistorical sources to provide practical political advice to the English State,” say MacMillian and Abeles (26). But after a certain point, pseudohistory becomes real history. I imagine that Dee’s book can provide available inspiration to writers of historical fantasy or alternate history for generations to come.