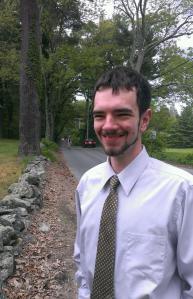 Today is a special day in the life of a blogger: the day his baby turns one. Although I once had another blog that I updated infrequently, this has been my first serious attempt to blog. Was this year a success? In celebration of this great anniversary, let my reminisce a retrospective over the marking events of this year. And when I am finished being nostalgic,  let me look to where the blog stands now and to where it might fly in the future.

I began The Vinciolo Journal exactly a year ago today with a post promising content of a literary and historical variety. If I had a target audience, I was not conscious of targeting one, which was probably a fault. For the record, I now state that my ideal reader is, like me, in his twenties (or thirties), a university student or graduate, and an avid reader of fantasy novels, particularly historical fantasy. Basically, I set out to write for someone like myself, who has interests similar to mine.

Many of the promises I made in January never saw the light of day, but other subjects I returned to with frequency. My first few posts were sporadic, seeing as I was working on my Honours thesis at the time. However, I managed to create three posts that remain successful to this day. Probably the most famous ever is Nothing is True; Everything is Permitted: Historical Reality and the Creation of the Myth behind Assassin’s Creed, likely because of its popular appeal and how it pushed aside the veil of fiction spun by the famous video game franchise. My stats display 519 specific hits to that page. A distant second in popularity was my treatment of the Marlowe assassination, at 168 hits.

I thought it would be brilliant to keeping writing these long posts, much longer than the 600 or so words that are normal to bloggers, in the interest of presenting researched information on historical subjects that interested me. I was not going to be one of those self-absorbed critics spitting out polarizing doggerel. Although I enjoyed doing research, however, my posts soon became very long and I began to realize that my audience–many of whom began  to follow after my first few successful posts in April and May–did not have the necessary attention spans.

After publishing my post on my Honours thesis, which is still in my top-ten posts at 66 hits (receiving some of my first serious comments), I began to write book reviews. I focused on historical fantasy novels currently in my library, but did not limit myself to that genre. These reviews covered most of my summer campaign. Highlights of my reading experience include Foucault’s Pendulum by Umberto Eco and the Fionavar Tapestry by Guy Gavriel Kay, which I covered in a series of three posts (I, II, III), one for each book. Such was the regularity of these book review posts that I temporarily re-branded myself as a book review blog. I was even asked to review William Harlan’s Antioch.

At the end of the summer, I returned to the triple-feature format for a dip into Scottish history with my posts on the lead up, action, and aftermath of the Battle of Culloden. This battle had featured prominently in two book I reviewed: one from Diana Gabaldon’s Outlander series and the second being No Great Mischief by Alistair MacLeod. I enjoyed writing the post series, adopting a trademark pictures-and-text style to ease the lengthier treatment of historical subject matter. Readers would return to these, but they would not be as famous as my posts on Masyaf castle or Christopher Marlowe.

When my final semester began at McGill, I swore to pick up the pace. I could publish one post every two weeks like it was nothing, sometimes including an extra post before the fortnight. As such, I challenged myself to put a Friday article online every week until Christmas. I succeeded by cleverly scheduling a three-parter on Guy Fawkes and the Gunpowder Plot to post during the most stressful period of my semester. I managed to post a few poems that were published in student literary journals, which began to draw people back to my site.

Finally, after publishing an assortment of material, from a post on wainscot societies to an essay on Machiavelli, from a poetry reading in which I participated to a silly picture I drew of The “Beet” Generation, I survived until the New Year and published a series of posts loosely related to J.R.R. Tolkien, whose birthday was January 3rd.

It was a long haul, but we made it! I have nearly 4,000 views so far and 116 followers, which includes WordPress, Facebook, Tumblr (http://www.tumblr.com/blog/thevinciolojournal), and Twitter (@matthewrettino). My following is a modest achievement, but I count my real victory in the devoted hours I spend posting top-quality content. Whatever followers I have will continue to receive more of the same posts: historical overviews, book reviews, essays, and every once in a while a poem. I actually intend to post quite a few more book reviews: Canadian poetry books, literary fiction, and, of course, fantasy novels. This Friday, for example, I will be reviewing a classic: Bram Stoker’s Dracula.

This blog has always been about historical fantasy in one way or another, attempting to find answers to the ways in which historical narratives are shaped by our desires and “fantasies.” History is written by the victors, we often say, but it is also true that history is written by anyone with an interest in it. Even victims include their distortions. I do not always so seriously probe these hard, philosophical ideas, but I do engage with them in an on-and-off basis within my posts. I hope to explore these ideas a little more explicitly in the future.

At the bottom line, though, what I really want is to have fun. Fun with a bit of intellectual stimulation thrown in. I hope to publish more poetry, more artwork. I have an entire other talent related to the visual arts in which I am passionate, if unschooled. (See the bottom of the page for one example.)

This is the purpose of my blog, but I have yet to finally explain the title. Why is it called “The Vinciolo Journal”?

To answer this question, I must explain my novel-in-progress. I have already written its roughest draft, though I am rewriting many of the scenes, in preparation for line editing. One day I may self-publish this book as physical copy or an e-book, but I cannot promise a specific time when, or if, this will be possible. The premise is as follows:

Intelligence, or The Stars Move Still is about Marco Vinciolo, the son of a Venetian alchemist, who has ambitions of becoming his family’s Maestro, a master alchemist. His father, Jacopo, was blinded in an accident, setting the future of the small family–which he runs almost like a mafia–into uncertainty. Then things get worse. A family friend exiles himself from Venice the day that the heretic Giordano Bruno is arrested by the Inquisition (26 May 1592). The Vinciolo family is warned to flee Venice, when the authorities charge Jacopo not only with heresy, but treason, supposing he was involved in a plot to assassinate Philip Hapsburg, the King of Spain. Marco must flee his pursuers, protect his disabled father, and fight for his and his family’s innocence, while uncovering the roots of the conspiracy, which have literally earth-shattering consequences.

The blog is, of course, based on the name of Marco’s family, specifically a reference to the precious journal of alchemical lore that the Vinciolos have kept in safe storage for a hundred years. Legends tell that Marco’s ancestor Marconni Vinciolo not only created the Philosopher’s Stone, but even wrote down the recipe for it between the Journal’s covers.

Perhaps this means my blog has a Philosopher’s Stone buried somewhere within it. Perhaps it is a reflection of my desire to create a mythic counterpart to my father’s side of the family, which is Italian (from a village near Naples). Whatever the true meaning, just remember that my novel is a historical fantasy, one of the main tags for my blog.

Here’s to a fresh start in the New Year. Who knows what untold wonders might await us now?