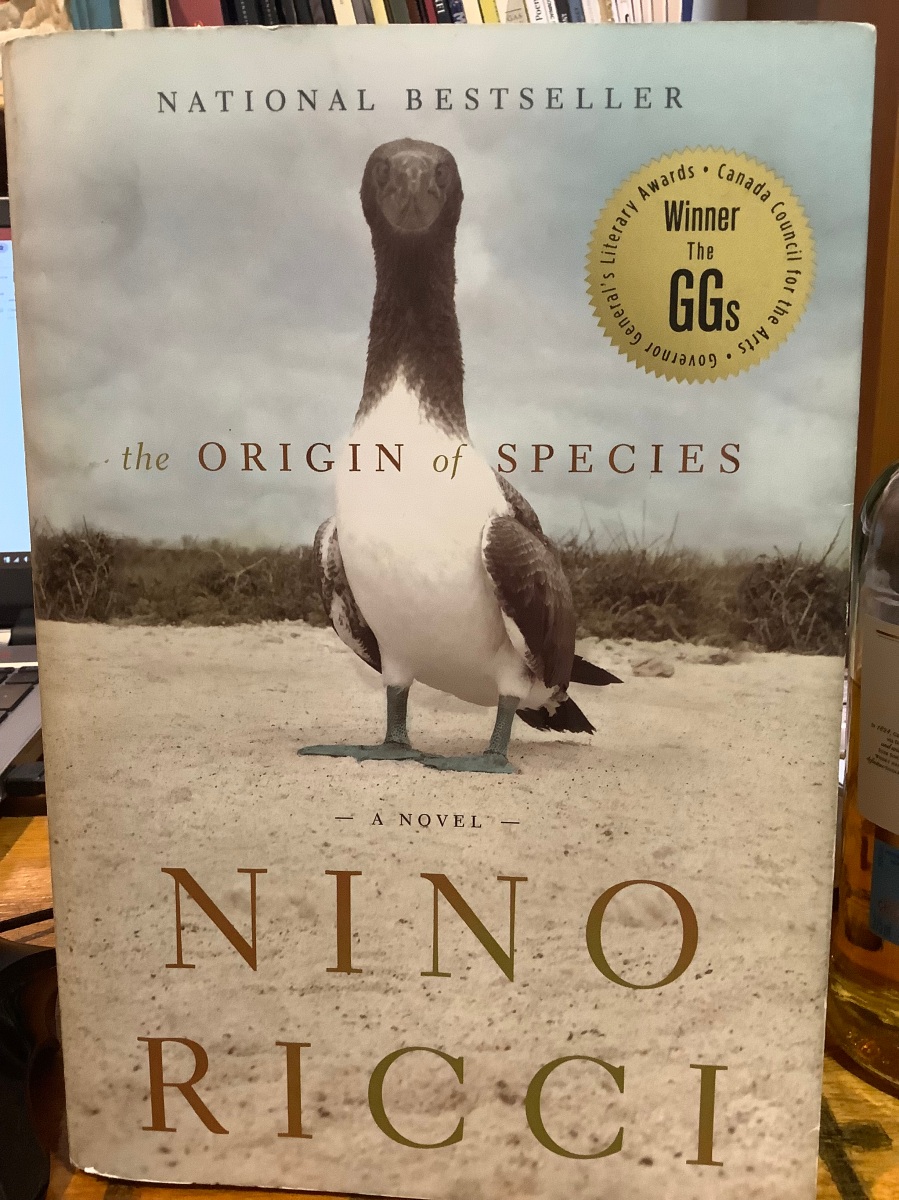 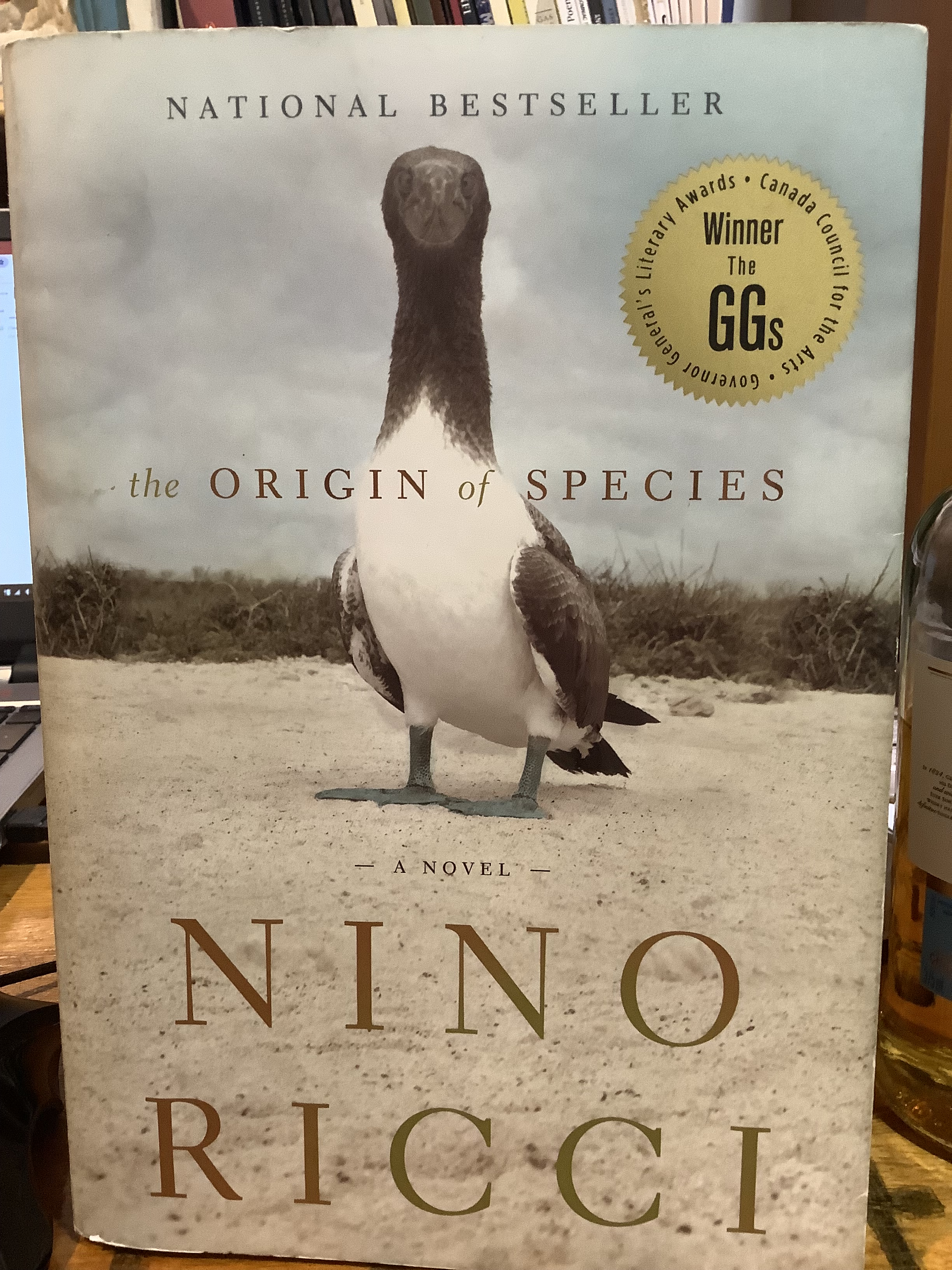 Alex Fratarcangeli, the protagonist of Nino Ricci’s The Origin of Species, works on a Ph.D. proposal that could change literary academics: he chooses to analyze literary texts in the light of Darwinism. As its title suggests, the novel is about Alex’s relationship to the life of Darwin and his seminal The Origin of Species. On the road, he lives through various failed romantic relationships and tries to learn what it means to be a father. This journey culminates in the production of a Ph.D. proposal that I believe to be both fascinating and potentially revolutionary, if academia takes these ideas seriously. In Ricci’s fictitious 1980s Montreal setting, academia does not.

Having achieved an MA in Victorian Studies, Alex pursues his Doctorate and is assigned Jiri Novak as his supervisor, a man with a troubled past. He has an idea about what he wants to explore, but he struggles to come up with the revelation that will tie his thesis together: kind of like the way I am currently searching for my Master’s research essay topic. Not even Jiri, however, can deny the simplicity and revolutionary potential in Alex’s work, even if the institution of academia finds Darwinism a tough pill to swallow.

What emerges is the argument that narrative is older than humankind. As Darwin’s discoveries about evolution once put humans in their not-so-special place in the animal kingdom, so does Alex’s thesis put all of literature in perspective with biology. To paraphrase Ricci, narrative is not the hallmark of human self-consciousness, but a path to it, a journey in itself.

The masked booby of the Galapagos presents its mate with a series of gifts that indicate the male’s desire to give the female a life of happiness. This, and interactions like it across the animal kingdom, prove that “happily ever after” is a story that goes beyond the human.

Bringing this understanding in light of my own research, I am astounded to think that Tolkien’s transcendent vision of the fairy tale’s happy ending, eucatastrophe, should be part of some biological imperative. No doubt Tolkien, who believed in the Christian resonance of eucatastrophe, would find Alex’s thesis radical.

Darwinism is often described as leading to the rise atheism in the nineteenth-century, a slaying of the ultimate Father–who was also Tolkien’s Father. Without God, what becomes of transcendence? Must narrative itself become arbitrary, without an overriding scheme? Is storytelling a denial of Darwinian competition and randomness in how it attempts to map order onto an orderless world? Is storytelling itself a fantasy of an order that no longer exists?

Of course, we see fantasies that have tragic endings. I need hardly mention Game of Thrones. But there is also the branch of historical fantasy, which blends Tolkien’s eucatastrophe with historical probability, often placing a moment of refuge, instead of an outright happy ending, amid a larger historical catastrophe, such as war and famine. When you consider Clute’s five points of the fantasy novel structure (wrongness, thinning, recognition, healing, eucatastrophe), and all that description of florid, healthy natural habitats in Thomas Convenant, you are left with the sense that this structure is tied to ecosystem. Fantasy magic is related to the “health of the land.” Is this a memory of  how narrative, like the structure of life itself, is “primal beyond reckoning?” (Ricci 400).

Could it be that eucatastrophic literary fantasy is a leftover from a protohuman mating ritual?

Suddenly, why so many of Guy Gavriel Kay’s novels–I’m thinking of The Lions of Al-Rassan above all–end with romantic couplings at the end becomes clearer than glass: eucatastrophe is itself a promise of sexual fulfillment. It is a fulfillment that often occurs despite the catastrophes of history. And in its promise of happily ever after, what the characters offer their beloveds is refuge: from the trials of history, the world, all the forces of eat-or-be-eaten.

What Darwinism implies about fantasy as a mode is a whole other ball of wax. Perhaps fantasy itself has a rather obvious sexual origin. “Happily ever after” may itself be the fantasy that spawned all fantasies, making fantasy itself older than mankind.

In fantasy literature, as in other forms of narrative, animal instinct lies at the foundation stone. When reflecting on how physical bodies of ancestral creatures came to influence the bodies of texts, Alex reflects, “Somewhere in literature’s dark beginnings there had to be real blood on the page, there had to be real bodies being sacrificed or being saved” (82). Even in the midst of his Darwinist reverie, the religious connotations in this line is intriguing. I believe it reminds the reader that Christ’s death–a body sacrificed so humanity may be saved–spawned a body of text. Perhaps in the even more distant past of the Bible, there were animal bodies whose narratives human beings inherited. Such creatures may have given us the greatest love story of all, the greatest eucatastrophe–according to Tolkien, the Resurrection.

Yet this “blood on the page” has a more eerie connotation: Doctor Faustus and his deal with the devil for knowledge. Perhaps Alex’s devotion to Darwinist ideas are his signature on a satanic contract. A hubristic scholar, Alex is beset by frustrations on all sides. He has sold his soul to academia and blames his partner Liz’s abortion on getting a paper published in Canadian Studies. Perhaps the Chernobyl disaster, referenced often throughout the book, is as metaphor for mess of his life. But if Darwin killed God, then Satan is dead as well, and Alex only serves to entrap himself in a cycle of guilt  marked by a fateful trip to the Galapagos islands.

Alex “had always seen Darwinism as just another of the grand schemes for making sense of the world–like Marxism, say, or Freudianism, or New Criticism–that proved all was right with it” (297), but his opinion soon changes as he begins to see the undirected life of Darwinian evolution for what it is. Soon he is offered a chance, perhaps, at redemption, when he learns he has borne a son to his Swedish girlfriend.

Eventually it is Alex’s research into sociobiology that sets his thesis in presentable order: “It was all total anathema to the literary purists insofar as they even deigned to notice anything reactionary–it was just biological determinism writ large, they said, the worst sort of regression, a heartbeat away from social Darwinism and eugenics–but that didn’t mean it wasn’t true” (398).

This theory goes against “everyone,” claims Jiri, his supervisor. “The Marxists, the feminists, the deconstructionists, everything that’s happened in the past twenty years” (409). Just as Darwin unhorsed the theism of his time, Alex threatens to overturn the other structures of significance literary theorists have built for themselves over the years, proving that literature is at base biological.

“I suppose it’s like Derrida,” Alex explains at an earlier point in the book. “This idea that there’s a whole structure in our minds that controls how we think. Except that instead of language or binary opposite or something like that, it’s genetic” (75).

If the radical theory of literary criticism contained within Nino Ricci’s The Origin of Species ever builds steam within the real world of academia, I have a feeling it could change the landscape. Alex is one fictitious character against a conservative institution, but his theory is simplifying, like all great theories, including Darwin’s, are. Time will tell the extent of the consequences of evolutionism, Darwinism, and sociobiology on the field of literary studies. Personally, I cannot wait to see the effects of the ideas on fantasy literature.

3 thoughts on “Fantasy, Narrative, and The Origin of Species by Nino Ricci”