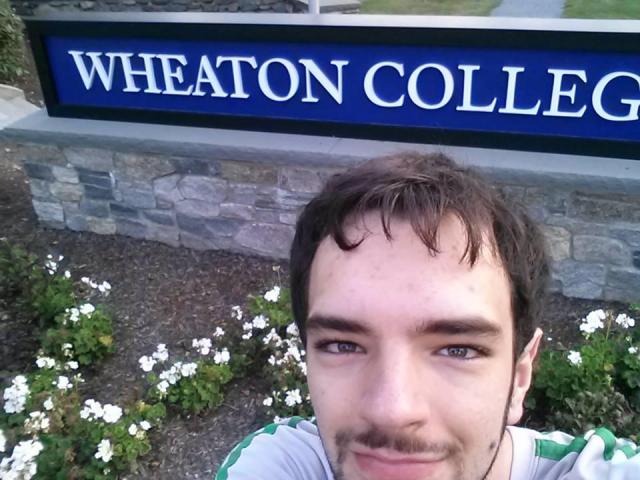 This is a series documenting my intellectual journey at MythCon 45 at Wheaton College, in Norton, MA (8-11 August 2014). Although I will attempt to summarize the arguments made by presenters, the series does not replace the presenters’ scholarship, but will represent my attitudes towards the topics.

Having arrived early the Thursday, I had already killed a lot of time on campus and slept over one night by the time I showed up for the first presentation at MythCon 45. Early friday afternoon, I attended “Perception and Ambiguity in Tolkien’s Prose Style” by Christopher (Chip) Crane. It drew me straight out of my lethargic state of mind and into the full-blown academic rhythm of the conference, which I had been anticipating for months.

The classroom in the science building where Chip presented was fairly empty when I arrived, but filled up quickly. I was surprised that so many had come to hear about style, which could seem to be a dry topic, even if it was Tolkien’s style. However, Chip Crane’s quantitative analysis of Tolkien’s prose style proved to a fascinating, highly relevant topic.

Having read Tolkien’s The Lord of the Rings a long, long time ago, I knew the passages Crane talked about: when describing a possibly magic phenomenon, Tolkien frequently adopts words and phrases like “seems,” “as if,” “[comma] 0r,” “maybe,” and “perhaps.” Crane has run digital searches to quantify the frequency of these terms in many of Tolkien’s works. The results show more hits on “seems” in LOTR, where it appears almost once for every page, than in The Silmarillion, for example.

Any serious stylist knows “seems” is a vague word, subject to deletion via the red pen. However, to say Tolkien was a good stylist is to be just as vague. He was more specifically a master, and a philologist to boot–one who studies the evolution of words. If he uses “seems” so much, it is no accident.

But why use “seems?” Could it merely be academic precision, or a symptom of polite British sensibility? Perhaps the One Ring seemed to Frodo to exude an aura of pure evil … but what Frodo subjectively perceived may have had no basis in reality. Or, perhaps Tolkien meant, eh-hem, that the Ring may have just perhaps exuded such an aura, if you don’t mind my saying so, good sir.

The answer of course is more complicated than subscribing any one reason for all the instances of “perhaps” or “seems.” Sometimes the ambiguity is academic and polite. But it is also a rhetorical strategy, Crane argued, to let the reader decide for themselves whether there is magic–or rather, more accurately, to guide the reader to the conclusion that magic is happening. He might say, for instance, in Father Giles of Ham,  that “giants seem less unlikely [at night].”

Even in “On Faerie-Stories,” Tolkien employs this ambiguity. He says, for instance, that Beowulf is a Christian story of a pagan past, “or an attempt at one,” an example of his academic carefulness. It seems to me that this use of language opens up Tolkien’s text to more various interpretations, since his above sentence would still be considered logically correct, if Beowulf was a successful Christian-Pagan poem. In his fiction, Tolkien creates ambiguity around some of the central moments of LOTR. Creating these spaces, he gives readers more room to form their own meanings.

In Materiality and Sociology of Text, a class I had several years ago at McGill, we explored how readers sometimes can “poach” meaning from a text by forming interpretations outside of the narrator’s ideology. Although Tolkien’s tales must rely on the authority of the teller to give them truth-value, using these ambiguous turns-of-phrase empower the reader. Perhaps they hint that Tolkien may have believed that finding meaning in literature is a dialectical process, that the power of meaning-creation that authors have is not absolute, that readers form their own equally legitimate meanings.

Upon leaving Chip Crane’s talk, energized with a new enthusiasm for Tolkien, I came to Joe Christopher’s presentation of “Tolkien as a Generic Poet.” I have not often had the opportunity to read Tolkien’s poetry, although his best (and worst!) work is certainly embedded in LOTR: everything from Aragorn’s prophecy to Tom Bombadil’s nonsense verse. What I found most fascinating in Christopher’s presentation was his juxtaposition of Tolkien with the Modernists.

Modernism, as one of its maxims, has Ezra Pound’s Chinese translation: “Let there be daily renovation,” or in plain parlance, “make it new.” The Modernist poet looks at old forms of poetry and renews the old forms, such as ballad, sonnet, and aubade. While the Inklings, who generally held by a common Christianity, were not involved with Modernist scepticism and doubt, they were not un-modern. In Charles Williams’ words, it was better to be modern than minor. They addressed the Modern age and even if they did not fit in with T.S. Eliot and James Joyce, they were still products of the same age, the same shaping forces.

Tolkien was less emotionally involved in his anti-modernism than C.S. Lewis, and knew the classics not through modern poets, but by training. He wrote alliterative verse in Old English style, such as “Sigurd and Gudrun.” He took the Poetic Edda and Nibelungenlied as his models. His poetry also includes the use of such various forms as the clerihew and nursery rhyme. (At MythCon on Sunday evening, there was an award handed out for the greatest clerihew written during the conference.)

Did Tolkien succeed in making it new? I would answer using a qualified “yes.” No, he did not renew poetic form into something unseen or unheard of before. But he did succeed in producing imitations and translations that could only have come from a mind thoroughly engrossed in a literary era that to us “normal” scholars feels so distant and remote. Like Pound, he was a translator. And from his knowledge, building on some Victorian and early twentieth-century precedents, he composed a sprawling fantastic romance about an all-powerful Ring, which was set in a meticulously thought-out secondary world based on a fictional history he had constructed in order to explain languages he had invented–for fun.

So he did fulfill Pound’s Chinese maxim, although the most unique part of his work was most likely his prose, instead of his poetry.Michael Drout’s presentation of Tolkien’s translation of Beowulf capped the evening, and what a memorable talk it was! Drout is an editor for The Tolkien Encyclopedia and even helped edit the edition of Beowulf in question, which includes the Tolkien short story “Sellic Spell” (O.E. for “Happy Story”). Drout has been credited with “discovering” the Beowulf translation, but maintains that Christopher Tolkien had donated the translation a long time ago to the Bodlein Library–Drout simply helped make the material available to a readership, among his other editorial duties.

Tolkien’s translation is a perfect example of his ability to write in the style of the Anglo-Saxons. However, his beautiful alliterative verse translation of Beowulf was omitted from the published text, so what readers are presented with is his prose. In return, explained Drout, the reader gets a precise prose translation of the Old English according to how Tolkien interpreted it; you will see Hrothgar’s vassals called “knights,” for example. Although leather and chainmail does not fit our Victorian image of the knight in shining, plate-steel armour, it is technically the correct term.

Tolkien originally did not wish for his Beowulf to be published, but it is available anyway. Christopher Tolkien’s comments on the text are invaluable, however, and give you an idea about how the author’s mind worked. He was nothing short of genius. For instance, he argued against the translation of the Old English term for “whale-road,” arguing that it could not have referred to a whale precisely, but to a species related to the porpoise that lived in those times in the North. “Dolphin’s riding,” is Tolkien’s sarcastic suggestion.

Tolkien also interpreted the metonymic use of the word “point” to mean “sword” as incorrect. In the passage in question, Beowulf is wrapped in the coils of Grendel’s mother. In a most lively manner, Drout acted out Beowulf’s situation during his presentation using a wooden sword, demonstrating that the only way for Beowulf to escape the death grip was to stab his foe with the point (a.k.a. tip) of the sword.

So deep was Tolkien’s knowledge of Beowulf that he argued the characters in Heorot–like Hrothgar and Unferth–belonged to a cycle of heroic poems similar to the medieval romances of Arthur and his knights. Without any evidence whatsoever, Tolkien believed he was right. No scholar of the present age would dare make such extravagant claims today. The absence of historical documents did not faze him, with the result that “Sellic Spell” is his own story, written by him, which is supposed to be a translation of what the original source text of Beowulf would have been like–making it, if Tolkien was miraculously correct, the oldest story in English, even older than the actual oldest story in English. And, of course, he translated “Sellic Spell” into Old English!

Tolkien’s genius enabled him to have the confidence–perhaps warranted, perhaps not–to commit what in today’s terms would perhaps be called crimes of historical fantasy. But we forgive him for it because he was so good. Tolkien may not have been a Modernist, but he was exceptionally good at being the precise antithesis of a Modernist. He was so at the service of those older texts that he believed his original work to belong to the tradition of Old English rather than to the modern tradition.

The world will never see another of his kin.

Next Week: My Journey at MythCon 45 Continues!