Last week’s launches for Scrivener Creative Review at Kafein last Thursday and The Veg at Le Cagibi last Friday were a success. There were many talented readers at both launches.

At Kafein for the Scrivener evening, speakers recited their poems like real hipsters in front of the electronic keyboard in the lounge area of the basement bar. There was Eric Foley, who I met by chance at an evening poetry reading for Summer Literary Seminars. I asked him to write a review and he did. Thankfully, he did not read his take on Curationism by David Balzer, but he did read us a piece he wrote during one of his travels in Europe. Then there was Greg Santos, whose book of poetry Rabbit, Punch! from DC Books is one of the books sitting on my shelf waiting for a reviewer to scoop it up. I might be able to find someone next semester to review it, but I was disappointed we couldn’t have featured a review in this issue. I might just review the book myself, if it comes to it. Greg might have been introduced to Scrivener due to one of my Tweets, or he may have known the magazine before that, but in any case, he got published in Scrivener and showed up at the launch. We were honoured to have him.

During The Veg launch, in the back room of Le Cagibi, I unwound after making a presentation on Leonard Cohen for my final Canadian Modernism seminar. Peach schnapps in hand, I walked up on stage and made a joke about this review that my mom had preserved from the 1980s within her own signed copy of The Book of Mercy. The book review itself isn’t funny, but on the other side of the clipping is a movie poster of Chuck Norris from Code of Silence, looking hell-bent on retribution. “I guess that makes it The Book of NO Mercy,” I said, and the audience laughed.

(This is especially funny for us lit students because Leonard Cohen–and his predecessor A.M. Klein–interrogates the problem of silence, and the codes that go with it, in his poetry: for example, Cohen’s poem aptly titled “Poem” in Let Us Compare Mythologies, in which “silence blossoms like tumors on our lips.” Plus pop culture plays a big part in Beautiful Losers, so its not like Cohen himself wouldn’t find this funny.) 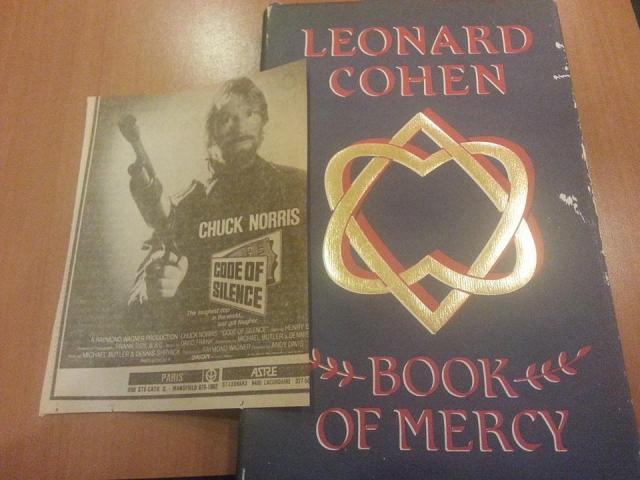 While on stage, I recited some of the same poems I did for CKUT Radio earlier that week–my first time on the airwaves. I don’t know if anyone listened to it, but if you want to hear it in the archives, you can listen here (24 November 2014). I also threw in an old classic that Mark, the MC, was a little obsessed by: “Saint Francis of the Amazon.” The novelty here is in how St. Francis, well known to have preached to wolves and birds, is in this poem preaching to toucans and lumpy, fat capybaras. Actually, the poem is more of an imagining of an abandoned cathedral in the middle of a jungle and the animals that come to re-inhabit it, since the humans are no longer around. I also tried to measure the reactions of some more of my more wartime poems, which blend imagery of Middle-East warfare with mythology. During the intermissions at The Veg launch, we were also serenaded by two fantastic musical groups: Kainé, Fili and the Believing Box and Tiger Lilies.

All in all it was a great week for poetry and a great way to kick back and pat one’s self on the back at the end of the semester for a job well done. Can’t wait until next semester’s launches!