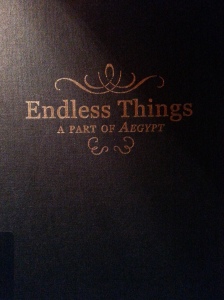 If you arrived at a crossroads, would you take the right or the left fork? We are faced every day of our lives with choosing a path. Once our decision takes us onward, we cannot return. The past that once was–and the path we might have chosen instead–grows more and more distant with each ‘Y’ junction we pass.

The courses of history and personal lives divide at such moments. The Germans invaded Poland in 1939 on Y-Tag, or Y-Day, the same day that New York City’s World’s Fair expressed a utopian optimism. Barbarism or civilization: which path did history take at that moment, and where did it go after?

Endless Things by John Crowley is the final book in his Aegypt Cycle. It is the culmination of thirty years of thinking, research, and writing on the part of the author, and an ending to a series that is thematically preoccupied with endings. Endless Things is a completion without an ending per se. After all, the thousands of possible futures that might come into existence at any moment are as endless and infinite as the universe itself.

Pierce Moffet has left the Blackbury Jambs for Old Europe on what sounds like an epic quest–to find the Holy Grail, or the Philosopher’s Stone, in either case an artefact that can prove once and for all that the world has more than one history, that its laws are mutable. Alchemy, once briefly possible for John Dee and Edward Kelley, is in our modern world no long possible–at least, Fellowes Kraft’s last unpublished novel claims so, which Pierce is supposed to copy and rework into a book. He follows Kraft’s old notebook through cities such as Rome, Florence, and Prague, which was once the centre of European civilization and scientific experimentation, circa 1588.

The setting of Prague, Pierce’s destination, is a central setting of the Aegypt Cycle, given its historical relevance. Once long ago, two diplomatic officials were thrown out of a window in that city, an event that led to the Thirty Years’ War, which tore apart Europe and the metaphysical certainties that bound it. Catholic fought Protestant for control of the Holy Roman Empire. Like Y-Tag, this is another juncture in history, and it forever changes the face of religion, diminishing its epistemological importance while the scientific method becomes, gradually, the new paradigm for truth.

All this is preceded by an ideal royal wedding that for all its purity, becomes the reason for strife. Traveling players perform Shakespeare’s The Tempest to celebrate the union. At the play’s end the sorcerer Prospero vows to drown his books and end his magical career, just as magic has come to an end in the wider world.

Prague, now part of the Czech Republic, is behind the Iron Curtain when Pierce goes on his quest. The author’s bio at the back of the book shows John Crowley’s own passport that he used on a research trip to Prague earlier in his life (photo undated), suggesting a certain level of identification between the author and Pierce. Combined with the author’s metafictional reflections through the character of Kraft himself, this autobiographical suggestion makes Endless Things into a novel about writing novels–and about narratives, especially endings.

The story of Giordano Bruno’s martyrdom is one example of a tale that doesn’t end when history suggests it did. The heretic philosopher, who was the first to suggest that the universe was infinite and the earth not at its centre, was burned at the stake in Rome’s Campo dei Fiori for his crimes of belief–but at the last moment, his soul transferred, by metempsychosis, into the body of an Ass, a sacred donkey. This Ass, living as the metamorphosed Lucius does in Apuleius’ The Golden Ass, that is, as a human in a donkey’s body, in turn transforms into the mysterious originator of the Rosicrucians, Philip à Gabala, who claimed to possess the deepest secrets of the universe’s meaning, but who never revealed them.

There are many surprises in Endless Things, the story of which substantially departs, in its first half, from the familiar settings and characters that direct the first three books. My biggest shock was that in one scene, Pierce appears to hold conversation with Dame Frances Yates, whose study, Giordano Bruno and the Hermetic Tradition, is one of the central research texts that Crowley consulted when writing Aegypt. Crowley’s identification with Pierce, which is implicit throughout the cycle, was made here nearly explicit, though never untactful. If there was any doubt the Aegypt Cycles’s earlier books are postmodern metafictions, Endless Things puts those doubts to rest.

The final chapters of Endless Things move towards an ending with graceful meditation–and it is an ending in a changed world, yet a world that we can all recognize. We see the advent of computers and the fall of the Berlin Wall, so the it leaves off some time in the 1990s–connecting events that happened as far back as the sixteenth century to the years of my own childhood. Prague once again becomes the locus of a revolution–the Velvet Revolution–that quietly forges a new world. With the fall of Communism comes the beginning of an increasingly globalized and history-less Western society. And in the midst of this, Pierce, with his rocky romance with Rosie in his past, has, upon his return from Europe, one last chance to find true love.

Endless Things ends my first reading of Crowley’s Aegypt Cycle, but it will not likely end my involvement with it. I plan to include some kind of discussion of Crowley’s work in my MA thesis, if I can, and I could think of no worthier object of study.

Brian Attebery in his 1996 essay “Tolkien, Crowley, and Postmodernism” argues that Crowley’s previous novel Little, Big makes the “fantasy tradition descending from George MacDonald, William Morris, J. R. R. Tolkien, and C.S. Lewis … formally indistinguishable from postmodernist uses of the fantastic” (21). I would gladly extend Attebery’s observation to the entire Aegypt Cycle, although I note that Little, Big has much more to do with the tradition of Tolkien and MacDonald than Aegypt does. Gnostic allegory and Renaissance philosophy are closer to the real tradition behind Endless Things.

Bringing New Left theorist Fredric Jameson into the conversation, I would like to quote the introduction to his study Postmodernism: or, The Cultural Logic of Late Capitalism, in which he says that the postmodern “looks for breaks, for events rather than new worlds, for the telltale instance after which it is no longer the same” (ix). If fantasy is a genre in which new worlds are built, then the Aegypt Cycle looks, rather, for events, these breaks that alter history.

These are the Y-junctures that result in changes we cannot go back on, the decisive moments in a society that alter even our ontological perceptions. The change from medieval animism and superstition into Enlightened science comes as a result of just such a break. Crowley accomplishes a dramatization of exactly how the former metamorphoses into the latter, how the world became what it is today and why it is no longer what it once was, explicitly addressing that age-old question, “Why is the world the way it is and not some other way?”

One thought on “Endless Things by John Crowley”