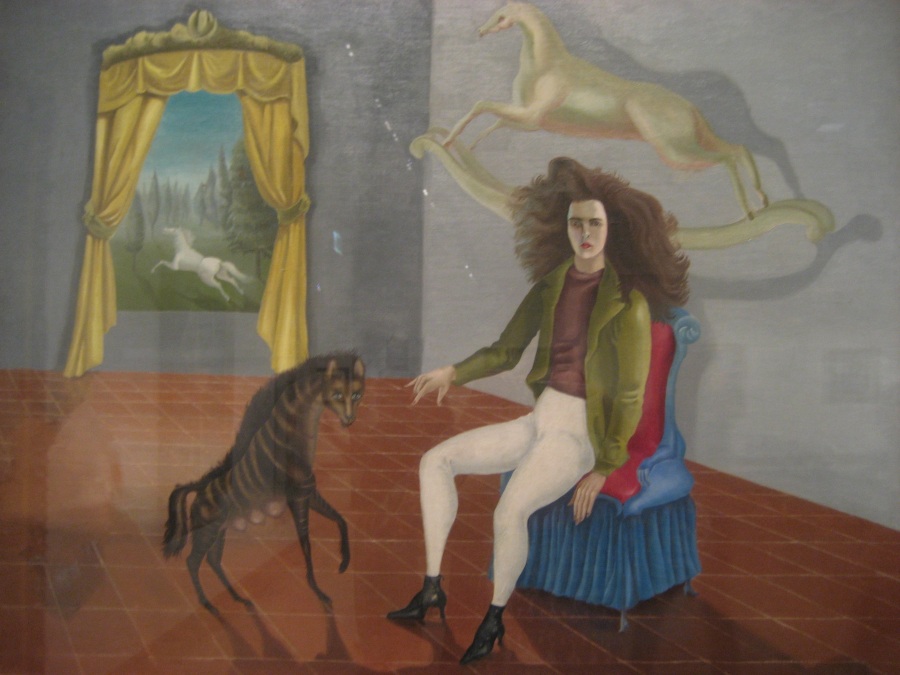 Leonora Carrington, a British-Mexican author and artist, is best known for her surrealist paintings and sculptures, but her literary output provides “a tantalizing glimpse of ways that surrealism might have had more influence on the weird tale” (277). Her story “White Rabbits” certainly gives a sense of dread and terror and decay in a “weird” way, while also exploring the violation of taboos in a surrealist way.

According to André Breton in his First Surrealist Manifesto of 1924, “surrealism is pure, psychic automatism by which it is intended to express, verbally, in writing or in any other way, the true function of thought, thought dictated in the absence of all control exerted by reason and outside all aesthetic or moral preoccupations” (quote taken from Sufism and Surrealism by Adonis, “Extracts from Surrealist Writing”). Surrealism seeks to liberate the mind and break the taboos imposed on thought by social conventions, in an effort to capture thought in its purest state. Often, this means that surrealist art takes on a dreamlike quality, such as in Carrington’s own paintings.

Weird fiction and surrealism thus seem to be two aesthetic modes that pair extremely well together. Both can be used to question the social constructs that human beings use to regulate and control reality. Both can be used to fog the categories by which we classify objects. Both attempt to describe reality in a piercing way, through a prism that gives a clearer view of reality through its distortion of surface reality.

But what does a surrealist weird tale actually look like? The best way to answer that question would be to read “White Rabbits” itself.

In “White Rabbits,” the narrator moves into a dimly lit home in New York, where she encounters a woman who carries out a dish of bones to feed a flock of ravens, using her long, black hair to wash the dish when they are done. Already, several taboos are broken: the handling of the bones (no word that the bones aren’t human) and the dichotomy between dirty and clean, encapsulated by the washing of the plate with a part of the human body. These suggest the woman does not follow the rules of wider society and, depending on how you understand these behaviours, they might even cast doubt that she is a human being as we understand it.

The narrator and the woman exchange pleasant smiles. Then the woman casually asks the narrator for “decomposed flesh meat” (278). Not sure if the woman is joking at first, the narrator eventually decides to do her new neighbour a favour by buying some meat and letting it go to rot over the course of a week before giving it to her.

When she delivers the meat to the woman in her home, she feeds it to her pets: a group of carnivorous, white rabbits “who fought like wolves for the meat” (278).

Her husband, Lazarus, appears, stating that he is upset that the narrator has been permitted to enter the house. The woman defends her and then suggests that the narrator stay with them, in that house, forever: “In seven years, your skin will be like stars, in seven years you will have the holy disease of the Bible, leprosy!” (279).

The terrified narrator runs away, “choking with horror,” yet unable not to look back as, in one unforgettable image, the woman waves goodbye: “her fingers fell off and dropped to the ground like shooting stars” (279).

These images are charged and cannot help but produce a shudder in the reader. There is something unsettling and uncanny, in particular, about a white rabbit–a peaceful, vegetarian creature–that gorges on rotten meat like a wolf. Though comic images from Monty Python and the Holy Grail came to my mind while reading this story (an association that did not exist in 1942), they did not get much in the way of the raw, unsettling, remorseless way Carrington writes the image. White rabbits also carry certain connotations from Alice in Wonderland: the narrator narrowly avoids tumbling down a rabbit hole into a backwards, bizarre world.

As uncanny as the rabbits are, however, what might be more uncanny about this story is how Carrington twists the casual, neighbourly relationship between the narrator and the leprous woman into something twisted. Part of the process of moving into a new home or apartment is befriending one’s neighbours by doing them small favours. It’s a form of hospitality, a code to follow, and simply one of the kind things people do for one another. Carrington reimagines this relationship as an extreme, grotesque version of itself, rendering the homely unhomely.

The code exists as the artificial construct it is revealed to be, but the normality of it is stripped bare. The neighbour’s request for a piece of rotting meat hints that there is something strange about this relationship. What’s more, the neighbour’s attempt to trap the narrator into their creepy, abject way of life breaks the bond of hospitality completely, an ancient code that in the Western tradition goes back to the Odyssey. The neighbour is a Polyphemus who raises carnivorous bunnies and attempts to trap the narrator in her leprous cavern of a home.

Carrington’s charged images are highly effective, so much so that it leaves me wanting to read more stories like this. Why did surrealism not have a greater effect on weird fiction’s development? The combination of surrealism and the weird is clearly potent, and, in my opinion, is more unsettling than weird fiction that takes on the conventional structures of horror.