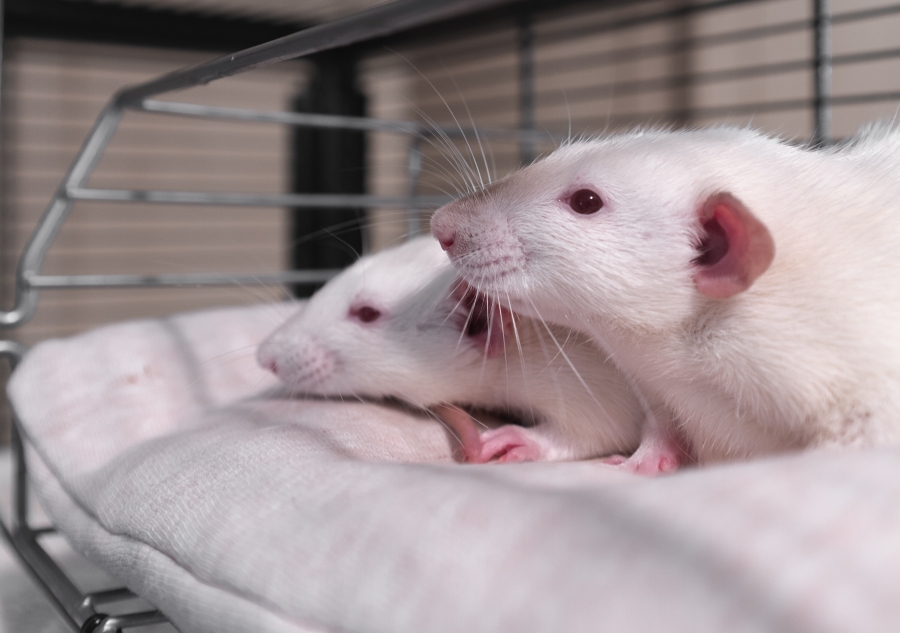 I don’t need to provide a content warning about cruelty to animals for this story, seeing as it’s already in the title. It was a harrowing tale, as it would be to anyone who keeps rats as pets or knows someone who does. Though they are not necessarily as charismatic as cats, dogs, or hamsters, rats can develop bonds with humans and, with acquired taste, they are as cute as any pet. Humans have an ability to empathize with such creatures despite the stigma that has hung over them since the Bubonic Plague.

Tilman Lipsitz, or Tilly, is one such person, a psychologist with a natural curiosity about human and animal behaviour that has gripped him since childhood. He has an empathy for rats and other living things his co-workers think of as naïve.

The scientists at the lab are testing rats’ response to pain and stress, which involves subjecting them to such cruelties as starvation, beheading, and other forms of torture. In addition, they keep hamsters, cats, dogs, and even a rhesus monkey, who are being subjected to grotesque experiments the cruelty of which calls to mind “In the Penal Colony” by Franz Kafka, as well as the very horrors of Auschwitz, which are explicitly referenced in the story.

The rats are more than metaphors for the Jews, homosexuals, and Roma tested on and killed during the Holocaust. They are irreducibly non-human animals, position in the story to make an ecocritical comment on humanity’s relationship with the natural world, which has a life that is independent from us and, to an extent, indifferent.

However, the Holocaust metaphor is still apt. James Triptree, Jr.’s story reminded me strongly of Art Spiegelman’s graphic novel Maus, in which the Jews are drawn as rats and the Nazis as cats to render the horror abstract and universal. In this case, it’s the scientists who play the role equivalent to the Nazis.

Tilly, whose ancestors survived the Holocaust, has saved many rats from torture. He keeps cages of them under the pretense of performing behavioural experiments on them, but really he’s attached: they are adorable when they “nestle in his hands, [and] teeteringly ride his shoulder.”

Due to his attachment, his research tends to be more species-focused—such as understanding rats’ “edge behaviour” and how they learn to adapt to new environments. He wants to listen to rats and watch them, learning from them instead of learning by doing things to them.

However, when summoned to his boss’s office, he receives an ultimatum: he must submit a serious research proposal in line with the institution’s research goals or quit his job. He cannot simply keep these rats forever as glorified pets.

The psychologist tries hard to think of an experiment his boss will accept that will cause minimum harm to the rats. Tripree provides his thoughts in a stream-of-consciousness as he works through it. What results is a philosophical questioning of why scientists consider it acceptable to experiment on animals.

Triptree ties it to the Cartesian dogma of the separation of mind and body. Scientists treat animals like automatons incapable of feeling pain. Since they don’t have minds, they thus justify the cruelty of inflicting pain on them.

Tilly has never outgrown his love of asking questions: “The excitement of actually asking, after all the careful work of framing terms that can be answered. The act of putting a real question to Life.” He has the youthful enthusiasm of a young scientists. Yet, Tilly has interiorized the judgments of his boss and his colleagues, who look down on his ability to empathize.

He is not naïve. He knows he cannot keep the rats and expect to do his job.

One day he drinks absinthe and decides he will essentially man up and return to his office while no one is there to slaughter his beloved rats, clearing out the cages which are not “experimentally justifiable.” At the lab, however, he cannot help but feed carrots to the neglected rabbits and free the clogged water bottle that has the hamsters dying of thirst.

He uses ether to put his oldest rats to death one at a time in the most humane way he can imagine, but soon realizes it’s going to be “a long night.” This passage reminded me of the gruesome ordeal of a B.C. man who culled a herd of sled dogs shortly after Canada’s 2010 Winter Olympics, shooting or cutting their throats them one at a time. It is harrowing even to contemplate such cruelty.

Harbouring fantasies of revenge against his colleagues, who have epoxied the eyes of rabbits to test their behaviour under sensory deprivation, he has a brief change in heart as the absinthe goes to his head. In one of the cages, the rats have assembled in a ball, gathering together to form a single organism known as the Rat King.

An image of animal solidarity against the cruelty of humans, the Rat King is like a golem of the rat-world that both defends their community and leads it out of suffering.

The Rat King also has the rarer form of an individual rat. Tilly discovers that he is in the presence of this second form of Rat King as well: a great rat, larger than the others, who wears a golden collar. He begins a procession into the sewers, leading the abused rats out with him, like Moses leading the Hebrews out of Egypt.

A host of abused animals joins him, including dogs, cats, hamsters, and the rhesus, as well as animals from outside the lab. This is a return to the Edenic peace at the end of their suffering at the hands of humans.

Refusing the human world, Tilly abandons the lab and follows the Rat King to share in the “silent communion” with the animals. He achieves what Martin Buber calls an unconditional I-You relationship, in opposition to the more utilitarian and transactional I-It relationship the other scientists have towards the rats.

He wishes to ask the King if he was good and whether he can be forgiven his cruelties. He begs the Rat King to take him where he is going—a place that has no pain. However, the rats and non-human animals go on without him, leaving him behind.

Left bitter and hungover in the filthy lab, Tilly comes to his senses and decides to finish what he started. What he does next is shocking, yet somehow believable: he unceremoniously dumps his rats in a garbage can and pours ether over them, gassing them and slaughtering them together.

Finally, he decides he will conduct another experiment to show his boss what he is capable of: fixing electrodes to Shetland ponies to test how long they run, no matter how injured they get. Rejected by the animals he loved (and the human woman he was crushing on who also rejects him), he becomes the very thing he hated.

This story is heart-rending and evocatively illustrates the Cartesian violence in the division of the human and non-human worlds. It seems it would do very well as an assigned reading in a speculative fiction or humanities course. In few other short stories does a protagonist perform such a 180-degree turn from a sympathetic individual to such a cold, heartless killer.

It’s certainly a remarkable moment worthy of discussion with some disturbing implications. “There is no error more powerful in leading feeble minds astray from the straight path of virtue,” says one character quoting Descartes, “than the supposition that the soul of brutes is of the same nature as our own.” When Tilly massacres his rats, his actions acknowledge that the human soul is essentially different from animals; from a Cartesian point of view, he is exercising his virtue as a human being. Yet, how many other massacres and genocides were the result of this belief, when applied to groups of human beings?

Whatever you think about animal cruelty and animal testing in scientific experiments, I doubt it’s possible to have a neutral reaction to this story.