In the visual arts, we see Orientalism perpetrating stereotypes of the Arab, everything from turbaned thieves with splendid scimitars to veiled harem seductresses. Spicy aromas wafting around bazaar stalls, jewel-encrusted onion-domed palaces, vivid green gardens of paradise, and the licentious inner sanctuary of the harem–all these are part of standard Orientalist set design.

Canadientalism, on the other hand, is more corny and a whole lot less sexy (unless you have a thing for men in uniform). It perpetrates stereotypes of the Canadian, everything from scarlet coated Mounties with saddled steeds to bucktoothed Laurentian beavers. The aroma of spruce wafting from a lumberjack’s cabin, snow-encrusted igloo homes, vivid green national parks, and the chilly interior the hockey arena during playoff season–these are the stereotypes Americans attach to Canada because they find our apologetic complacency favourable to their imperial interests.

Whereas the Arab is a symbol of terror for many Americans these days, the Canadian is a symbol of timidity. The Americans would never invade their neighbours to the North, at least not as easily as they’ve done in the Middle East, but Canadians can generally be trusted to go along with whatever the Americans decide to do. Sorry, but there’s nothing threatening about a bunch of maple syrup-glazed doughnut eating, Tim Hortons coffee-drinking igloo dwellers. Except maybe Don Cherry, with his exotic suits gleaming like Damascene silk.

Above all Canadientalist texts, one stands above all as a paragon of literary exoticism: The One Thousand and One Hockey Nights in Canada. Loosely based on The One Thousand and One Nights, OTOHNC recounts the story of a Prime Minister embittered by Quebec separatism and the heroic MP who filibusters Parliament with a storytelling marathon that lasts for exactly one thousand and one nights. When the last story is told, the PM is fully cured of his jealousy, after learning so many stories about the whelps who have had it worse off than he has.

On the three hundred and fifty-sixth night, a tale is recounted of a French-Canadian university student and Habs fan who is then transformed into a beaver when he accidentally triggers the wrath of a jinni. The beaver travels to Ottawa to convince the chief of the RCMP that he is human. Seeing that the beaver has above average intelligence and can even play chess, the police chief makes the beaver his own personal pet. This leaves it up to the police chief’s mistress, an Indian princess, to plead on behalf of Mr. Beaver for the return of his humanity.

The following illustration is based on an actual illustration of The One Thousand and One Nights by H.J. Ford, a talented English illustrator active at the turn of the twentieth century. It was a quick sketch in which I hoped to pastiche this illustrator’s style with a kind of humour reminiscent of Kent Monkman’s style in his painting The King’s Beavers, on display in the Canadian exhibit at the Montreal Museum of Fine Arts. 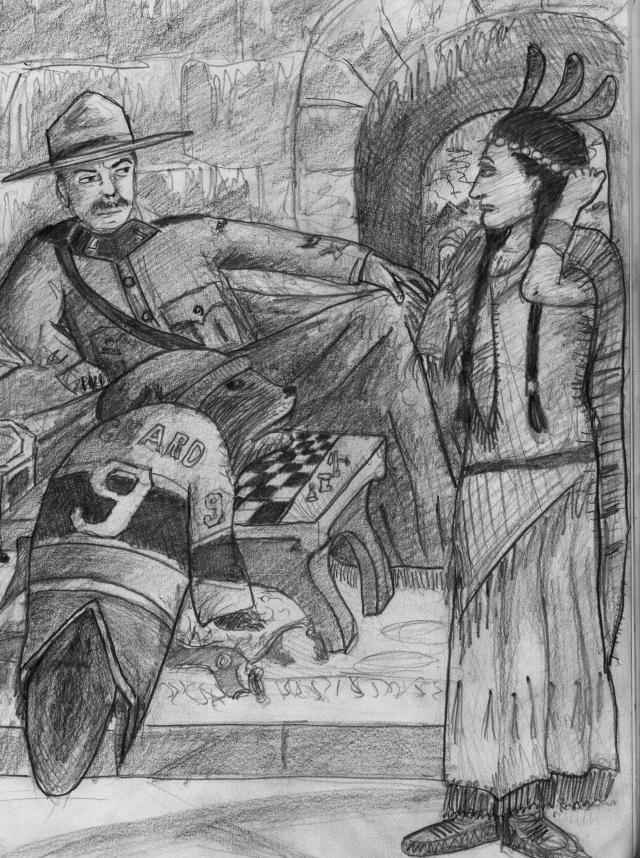 Are there Canadian Dragons?

What are the Seven Pillars of Wisdom?

Haroun and the Sea of Stories by Salman Rushdie

King of Egypt, King of Dreams by Gwendolyn MacEwen