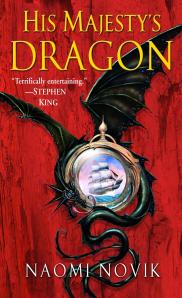 What if dragons and their riders formed their own corps of soldiers adjacent to the Royal Navy during the Napoleonic Wars? You get Naomi Novik’s Temeraire series, the first novel of which, His Majesty’s Dragon, I have just finished reading on my Kobo.

William Laurence, a Royal Navy captain engaged in the Napoleonic Wars, captures a French ship bearing unusual cargo: a dragon’s egg. When it hatches, the creature accepts Laurence as his master, changing the captain’s life forever. Laurence names the dragon Temeraire, thinking of the name of a British ship. ‘Temeraire’ means ‘bold,’ ‘reckless,’ ‘dauntless,’ and is the sort of name a navy man without experience in the Aerial Corps would bestow.

Here you see the real originality of Novik’s world: Temeraire is named after a ship, hinting that dragons take the place of ships in this alternate nineteenth-century universe. Lawrence does not become the sole, independent rider of a dragon but the captain of a dragonback crew. Temeraire truly becomes one of His Majesty’s dragons, flying alongside His Majesty’s ships, which are trying to prevent the transports for Napoleon’s army from crossing the Channel.

Laurence initially loathes the idea of becoming a member of the Aerial Corps. However, he sees that he has no choice but to join, given his profound sense of duty. It means he must forsake his promising Navy career. He will also never be able to enjoy social functions, since those in the Corps live in isolation due to the nature of their duty and are even looked upon as social outcasts. Lawrence must furthermore lose the hand of a woman he has never formally courted.

But as Temeraire grows in size from a hatchling, so does Laurence’s bond with him. Soon he learns to favour the company of his dragon over that of human society. He learns to accept his lot as Corps captain.

Mix Master and Commander with Eragon and you might think you have a good idea of Novik’s concept for this historical fantasy world. But the truth is more complicated than that; dragons are an analogue for warships and function alongside the Navy. This element of fantasy shows how similar an exchange of broadsides in a naval engagement is to dragon fire.

I was uncertain what to expect wading into His Majesty’s Dragon, but I was pleasantly surprised. The prose style alone is remarkable; Novik uses polite semicolons to render her dialogue and style into the period cadence. Temeraire is about as polite in his speech as dragons come; he is the sort of dragon to whom you could read an Isaac Newton treatise over a cup of earl grey. Temeraire is also special for another reason, an unusual feature of his that makes him feel different from other dragons. But that I leave readers to discover.

The first chapters of His Majesty’s Dragon set off at a roaring start. It was a pleasure to not only learn about the biological aspects of dragons and their military uses, but the social consequences of humans who associate themselves with the creatures. Although the middle sags, when Laurence and Temeraire must train for war and get to know about life in the Corps, it picks up at the end and introduces the sequel around a promising premise. I was personally hoping that premise would get addressed in His Majesty’s Dragon, but I suppose I would have to buy Throne of Jade to find how it plays out.

Battle of the Nile: http://en.wikipedia.org/wiki/Battle_of_the_Nile