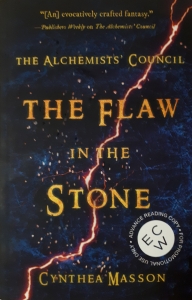 The Flaw in the Stone, Cynthea Masson’s second novel in her Alchemists’ Council trilogy, explores the occult origins of the Rebel Branch’s revolution against the Alchemists’ Council. In a world where manuscript scholarship is the key to harmonizing the universe’s dimensions, the balance of power is about to be thrown off kilter.

Genevre, an outside world scribe currently inhabiting Flaw dimension, unlocks a forbidden text that will give the rebels an advantage over Council dimension for the first time in thousands of years. Seizing the opportunity, the High Azoth of the Rebel Branch, Dracaen, plans to use the long-forgotten alchemical formula to destroy the Lapis, the source of the Alchemists’ Council’s power. However, when his obsession becomes tyrannical, Cedar and Saule form a risky plan to unite rebels and alchemists, while preserving both free will and interdimensional balance. In choosing to switch allegiances, however, they risk the destruction of both worlds.

The story takes place over hundreds of years and across multiple dimensions without losing its intrigue. It carries the reader from the dark caverns of Flaw dimension to the bright gardens of Council dimension, as well as the outside-world protectorates of Vienna, Qingdao, and Santa Fe. Some scribes aligned with the alchemists become rebels, while some rebels become alchemists.

The complex allegiances are complicated further because The Flaw in the Stone develops several protagonists instead of focusing on one, as the first novel of the series did. The downside to having so many characters is less focus. However, the ethically complex problem of free will brings unity to the novel, since it is explored in different ways. Since any changes made to the Lapis in Council dimension affect all dimensions, the alchemists essentially control humanity and the outside world. Dracaen conscripts Melia and Jinjing to assist him in his plan to overthrow the Council in the name of preserving humanity’s freedom. However, in doing so, he compels both women to undergo an emotionally devastating alchemical ritual that will give the Rebel branch the upper hand. This leads them to question whether their commitment to Dracaen’s rebellion was really worth the cost.

Dracaen forces Melia to conceive an alchemical child, an entity of such power that he believes it will help the rebels destroy the Lapis. Melia feels “like a mere vessel, like a human alembic whose sole purpose was to incubate and then deliver a miracle child” (146). Her anxiety reveals not only her fear of pregnancy but her anger at being objectified. The power dynamic inherent in Dracaen’s relationship with Melia recalls recent public discussions about consent. This forced incubation, committed in the name of freedom, ironically makes Dracaen as tyrannical as the most dogmatic Council-dimension alchemists.

Historical allusions add poignancy to the Rebel branch’s revolt. Since changes to the Lapis affect the outside world, the Rebel branch’s attempt to eliminate it in 1914 more or less causes the First World War. In one memorable scene, Saule, Genevre, and Jinjing hide out in the Qingdao protectorate as the Japanese bombard the city, an allusion to the 1914 Siege of Tsingtao (Qingdao). Other historical events are alluded to implicitly. One attempt to eliminate the Flaw is said to have been “responsible for the Mongol Conquests” (188). Also, it is no coincidence that the novel begins in 1848, when a wave of social uprisings swept across Europe. Though this historical allusion is not explicitly developed, the date adds poignancy to the rebels’ struggle–perhaps an ironic poignancy, given that outside world events are only reflections of the harmony within Council dimension. Does this reduce the free agency of the human beings who participated in these events?

Masson’s scholarly knowledge of alchemical manuscripts lends the world she has constructed a certain authenticity. For example, she bases Ilex and Melia’s mutual conjunction upon the alchemical concept of the Rebis, a man and woman combined into a single individual. Her training as a medievalist comes across in her writing style, which is formal and academic.

The Flaw in the Stone fills in many of the unanswered questions readers are left with at the end of The Alchemists’ Council. In a pleasant surprise, the novel’s timeline continues into the twenty-first century, bringing the action up to date with the end of the first book and setting up the final book of the trilogy.

If you enjoyed this book review, you might also enjoy:

At the World Fantasy Convention in 2015, I happened to receive a free copy of Cynthea Masson‘s The Alchemists’ Council (ECW Press, 2016). It introduced me to a transdimensional universe in which alchemy is treated as a metaphor for ecological sustainability. I’ve never read alchemy treated in this way before and the subject matter was treated in a complex, dialectical fashion that I found really appealing.

It was such an engaging read that I reviewed it for The Bull Calf Review. You may read the full review here.

The current issue of the Bull Calf Review has also published reviews done by several of my colleagues, Zain R. Mian and David Pitt. It has also published my Poetics teacher from my undergrad years at McGill, Joel Deshaye, as well a review by the 2016-2017 Parliamentary Poet Laureate, George Elliott Clarke. The Bull Calf is an “accessible, academic, and diverse tri-annual collection of reviews and retrospectives” and was founded at McGill in 2010.